Bumper is cut and fitted 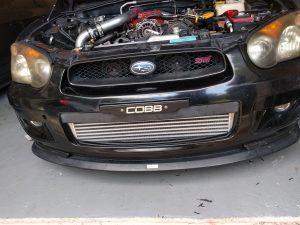 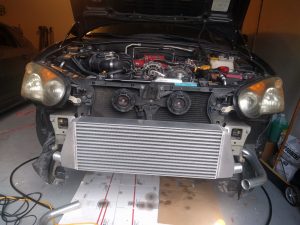 Let me preface this with the fact that I am not a lawyer, nor should anything in this post be taken as legal advice. Use the information provided here at your own risk.

From 2008 to 2010, Subaru used a rubber bushing for the front control arm rear on the STi (and probably other models based on the same suspension setup like the WRX and Impreza). The benefit of rubber in the bushing is a soft compliant feel with very low NVH. However, due to the design of the bushing and the extreme angles that the control arm has to articulate – the bushings quickly deteriorate.

This was solved in the 2011 model year STi – Subaru moved to a spherical bushing for the front control arm rear. This part is easily retrofitted to 2008 to 2010 STi models with the following part numbers:

Everything is a bolt-on affair and the control arms also include a new ball joint.

There is a slight increase in NVH, but the spherical bearing lasts much longer and provides much more precise control than the old style rubber bushings. Made a quick trip to an Ace Hardware to get an o-ring for a coolant cross-over pipe on an EJ25 I was helping to put together. Turns out a #34 or #44 o-ring sits perfectly in the gland on the block and seals the crossover pipe perfectly as well.