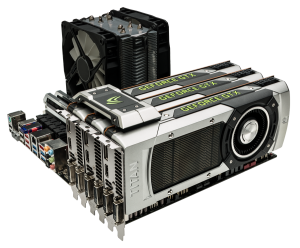 Enabling SLI on non-nVidia approved platforms has less of a pain-in-the-ass since nVidia allowed SLI on Intel chipsets, but enabling SLI on a workstation designed to take Quadro cards so it will work with Geforce cards is a little more of a pain in the ass.

In my configuration, I’m trying to enable SLI on an older Dell Precision 690 workstation with an SLI riser card. Normally, nVidia and Dell only allow with very expensive Quadro video cards in this configuration. However, I got myself a pair of GTX260 Core 216 video cards for very cheap and so I wanted to do a little experimenting to get this to work.

Plenty of modifications exist to enable SLI on non-supported configurations, and the solution I chose was DifferentSLI. However, this software patches the nVidia kernel-mode driver and then signs it with a self-signed certificate that obviously isn’t chained to Microsoft’s CA. This means for Windows to load, it has to be put into Test Mode to allow the kernel to accept a self-signed certificate and load the driver.

Since I already had Class 2 validation with StartCom, I embarked on a poorly-documented journey to sign the modified driver file with my Code Signing Certificate from StartSSL and load it, so I wouldn’t have to put Windows into that ever-annoying Test Mode.

This guy’s got the right idea