It Works, In Theory

Before purchasing the tune, please make sure you have the necessary hardware (or that you can borrow them) – the tuning process for a P3 is significantly different than other models:

During the tuning appointments, you will need to allow Robert access to your computer from where he will run the software required to extract the PIN and to flash the ECU. During this process, you’ll want to have the battery on a battery tender, make sure the laptop is plugged into power, and also is connected to the internet.

It will take several appointments before the car is tuned. The first step is to extract the PIN from the ECU. The second step is to download a copy of the stock programming and analyze and modify it, and the third step is to rewrite the modified programming back to the ECU.

For my car, extracting the PIN and pulling a copy of the stock programming was relatively easy. Both of those were performed in one session; however we did spend several months of trying to flash new programming to the car. Each time we tried to flash new programming, Robert found another parameter that required to be changed so he’d have to take it all back and make more changes.

In mid April, we finally hit success with a good reprogramming of the ECU. Immediately after the success flash, my dash lit up like a Christmas tree. Particularly concerning was an error message in the dash saying the car had to be in Park to shut off the engine. If you see this, don’t panic. Tap the Start/Stop button twice to shut off the engine.

We scanned the car with VIDA and was immediately bombarded with a page full of error codes: 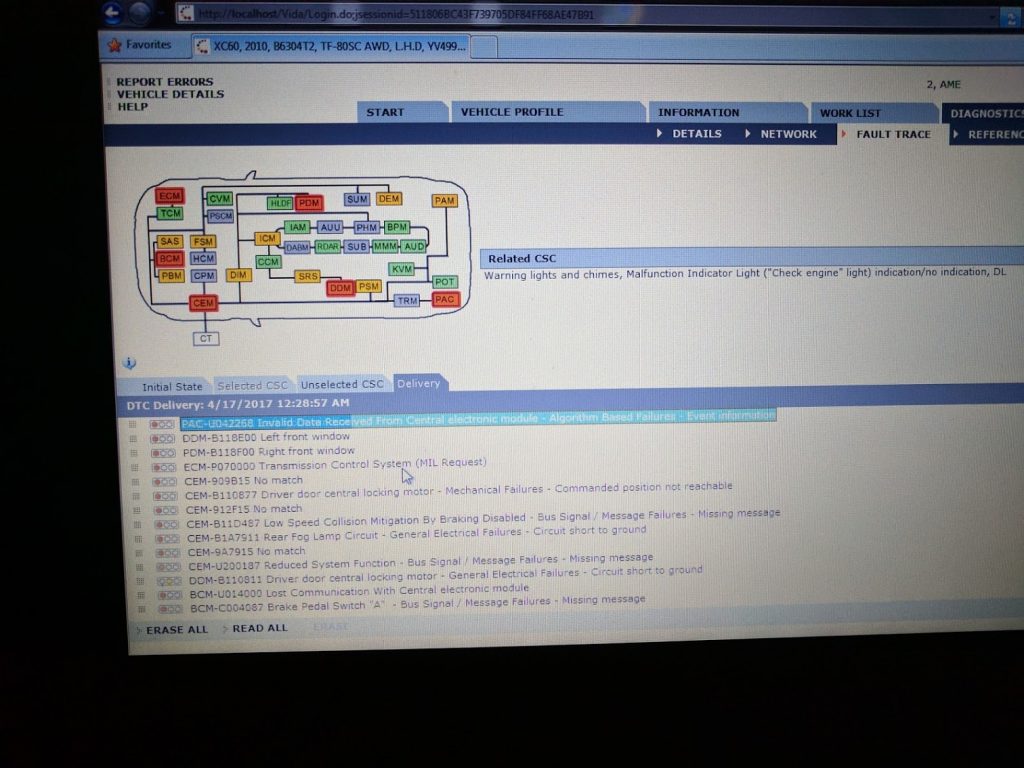 Luckily all of these errors were temporary. We cleared all codes and took the car for a quick test drive. After a few drive cycles, no more codes were logged and the car’s behavior was back to normal.

At this point, my car was flashed with the Stage 1 programming, which is developed for an otherwise “stock” car. No additional hardware is required to run this tune, though my car also had a Jetex catback exhaust. After the car was programmed, the car was far from “normal”. A short drive around the block revealed a significant increase in low and mid range torque. A light stab of the gas pedal releases a tidal wave of torque that wasn’t present before and allows the car to effortlessly and rather undramatically accelerate to felony speeds. I was ecstatic; at the end of the week I was going to take the car on a cross-country trip from Houston, TX to the Tail of the Dragon in North Carolina to meet up with other Volvo enthusiasts. This newfound torque was going to make the drive up much more entertaining.